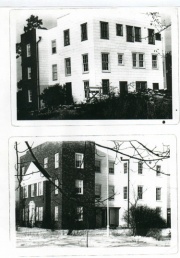 Originally the Thomas Underhill Powell House, corner of Broadway and Powell Avenues. Mr. Jack Kelly and Mrs. Edith Simmons ran the establishment. The first section was built by Charles Powell, 5th generation after the original Thomas, on the western section of his family estate in l854. It was a small, two story building with a porch and peaked roof. After Charles' death in l860, the building was sold to a distant cousin, Thomas Underhill Powell. Powell owned Villa Carlotta (Rathcabbin's first name) until his death in l902. The building was rented out for about 4 years until Dr. Magilligan bought it, primarily for summer.

Until Dr. Magilligan's time, the building remained unchanged. About l912, a fire burned about half the roof and attic. At this time, the Magilligan's made the first major additions to accommodate a large family. The Magilligans owned this property until l939 (or 1937) when Mr. James Kelly bought the place. He envisioned it as an apartment building and had it as such, starting between l939 and l941. In the changing, the old building was knocked down to a great extent and the only old sections remained on the inside.

Mr. and Mrs. Frank Simmons of Bethpage, who are remodeling their home located on the corner of School Street (now Powell Avenue) and Broadway, have uncovered some unsuspected history in the original portion of the house. It was built in 1854 by the Powell family who owned much of the land in that section of the town. All the beams are hand hewn and put together with wooden pegs in place of nails. The main support for the flooring was a tree that had been roughly sawed in half. It was hoped that the original structure could be preserved but a thorough examination found it to be so sagged and weakened that it will be necessary to tear it down. Mrs. Neal, a life long resident of Bethpage, was married from the Powell home nearly 50 years ago and has many memories of the days that "used to be".