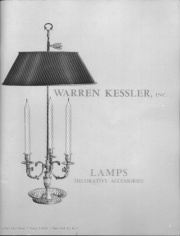 In 1939 Warren Kessler built a factory on the site of the Feuchsel Pickle Works, located north of the railroad tracks, east of Broadway. This company manufactured lamps and lighting units for all the American embassies around the world. Exquisite Kessler lamps were included in the remodeling of the Truman White House. Motto in 1946 "What Bethpage Makes - Makes Bethpage." Warren L. Kessler, Inc. Manufacturers of lamps and decorative accessories. Known throughout the nation for exquisite glass products. In the year 2000, a CVS drug/convenience store was built on the site of the Kessler factory.

The information below is from the CPHS NEWSLETTER - July, 1997

In the mid 30's Warren Kessler had a store on West 23 Street in New York City then to West 24th Street where he assemble lamps. The business was known as Warlou, for Warren Louis Kessler. In 1938 he expanded the operation to manufacturing glass and relocated in Bethpage.

Warren, the eldest son of Austrian Immigrants, was a genius of design and a good business man. He brought many skilled craftsman from Czechoslovakia to produce the same high quality of glass that was the pride of Europe. Many of these craftsmen were housed in a home on Central Avenue and Broadway. In 1941 the factory was in full operation.

As you entered the factory, the left side of the building were three furnaces two of them were continuously in operation 24 hours a day 7 days a week. To the right were the glass blowers, here the craftsman took the molten glass at the end of their blow pipes and blew the glass into hand crafted molds. When taken from the molds the blow pipes were cut off and the glass was put in a cooling oven to be cured for approximately eight hours. The products then had to be finished, rough edges had to be filed and polished smooth. The paint booths were back along the railroad tracks. A poor location! This resulted in a serious fire in the mid 40's due to a spark from a steam engine on the railroad passing through which ignited the paint booths. Now on to the second floor, here is where all the assembly of the Kessler products took place. In the back of the building was the store room and shipping area. The shipping of the Kessler products was quite a challenge, in a time before bubble wrap and styrofoam peanuts. Ethel Surprise told, as a little girl, collecting newspaper for packing, which she brought to the factory, and was rewarded with a Kessler glass treasure.

The manufacturing took place in Bethpage, while Warren lived in New York City, where the showroom was located on 57th Street near 3rd Avenue. Here Warren conducted business and entertained customers.

Herman Kessler was the genius behind the crafting of the intricate molds. Herman settled with his family in Bethpage and had "hands on" running of the business. Herman was not only a talented business man, but he was also an inveterate tinkerer. His hobby was printing all the brochures for the business on a printing press set up in the basement. He was also an expert wood turner.

Kessler glass, not only adorned the embassies around the world, they were also purchased for Bloomingdales, Marshal Fields in Chicago, large hotels, movie companies and colleges. They were in full production for the demand of new home owners after World War II, for families needing traditional lamps. In 1960 a Kessler lamp would sell for $300.00.

Kessler was community minded and opened its doors to school children for tours. They were the 2nd largest tax base, next to Grumman, in Bethpage. They employed approximately 25 to 50 people.

Sadly, Kessler closed its doors in the early 1980's. Warren died in 1966 and Herman in 1978. The price of oil, the Arab oil embargo, the lack of modernization, the fact there were no copy rights or patents for their designs and the designs were easily copied. Then another fire all contributed to the end. So called modern manufacturing methods which eliminated the hand decorating and painting of lamps and the all important hand finishing of each component that went into creating a Kessler product. People went with the run of the mill, cheaper product, rather than the hand crafted product with a higher price tag. It is a strange turn of events today, people now search out these hand crafted pieces at antique shops, flea markets, and tag sales.

David Kessler, son of Herman Kessler, gave the above history of the famed Kessler Glass Factory at our June, 1997, meeting of the CPHS.

Joseph Olsen, former resident of Bethpage, mason by trade, and responsible for building the adjoining buildings to the Kessler Factory. Mr. Olsen told how Herman would take either the apple or cherry log and carve out the interior of the log on a lathe to form a shape of a new lamp body. After the desired shape was attained the newly formed mold was cut in half lengthwise and fitted with hinges so the glass blowers could form the new design in the mold and then remove it for further processing.

Sol Lieberwitz, 87 years old (in 1997 at the time of the CPHS meeting) worked for the Kessler's from 1928 - 1977 with breaks in employment, at one time to serve in the military during World War II. He told of the respect he had for the genius of the Kessler's and the wonderful experience to have worked for them.